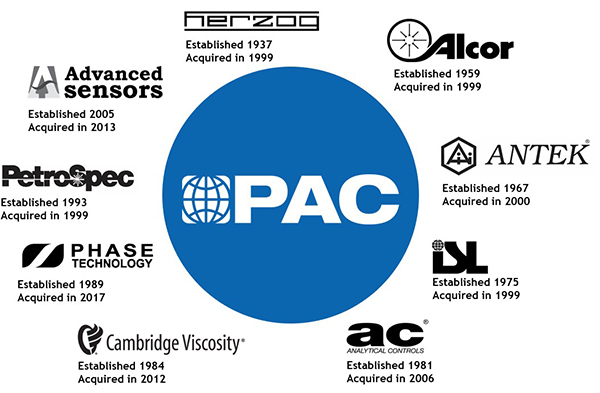 PAC has combined the world’s most respected and long-established brands of analytical and testing equipment into a single manufacturing, marketing and service organization. Each of our brands have long histories of developing best-in-class analytical instrumentation for lab and process applications. The dynamic synergy of the PAC team and its unique technologies has led to the development of unique, cutting-edge instruments.

AC Analytical Controls® is the recognized leader in specialty chromatography analyzer solutions. Our analytical innovations have defined instrumentation standards since 1981 across the entire spectrum of hydrocarbon-based product streams, including gasoline, naphtha, crude oil, residues, and various gaseous products such as natural gas and liquefied petroleum gas.

AC combines industry-proven gas chromatographs with decades of industry-specific application knowledge to provide the best solutions to meet the toughest customer challenges. AC is also a recognized partner for any custom-engineered GC solution.

Antek also includes process analyzers for monitoring total nitrogen and sulfur in liquids, gases and LPGs and determination of nitrogen, sulfur, total hydrocarbon, and aromatics for the quality assurance for CO2.

Cambridge Viscosity (CVI), with over 25 years of experience, is a known global leader in small sample viscosity.

Its innovation includes a patented sensor technology, which sets it apart from the rest of the industry. This patented, proprietary electromagnetic-based sensor technology utilizes only one moving part, a piston, driven electromagnetically through fluid in a small measurement chamber. A deflector, positioned over the piston, moves fluid into the measurement chamber, while two coils move the piston back and forth at a constant force. Proprietary circuitry analyzes its two-way travel time to measure absolute viscosity. Every CVI viscometer uses one of these sensors, which is key to running an efficient process since the same technology is utilized both in-line and in the lab.

Herzog early on pioneered efforts to automate traditional manual methods of testing in order to save manpower and eliminate user errors. Herzog also took the lead in efforts to develop and standardize new, alternative lab methods where the hallmarks were low sample volume requirements, achieving faster results, higher precision in analysis and greater ease of use by operators with lower general skill levels.

ISL’s story began when a group of engineers and scientists in the North of France, the heart of the country’s petrochemical industry, began developing automatic instruments for use in the petroleum industry.

By the mid 1970s the ATPEM trademark was born, and rapidly became a worldwide leader in automatic petroleum testing instrumentation. In 1986, ATPEM was reorganized and became ISL, and was acquired by PAC in 1999.

Phase Technology was founded in 1989 by Charles and Norman Tsang and has grown organically through the design and engineering of highly innovative and functional products, dedication to research and development and precise cost-effective manufacturing capabilities. Phase has an outstanding reputation as a leader in the cold-flow properties testing industry due to consistent introduction of new innovative products and continual improvement in the quality, design and capabilities of its offerings.

Advanced Sensors is the leading global supplier of Oil in Water (OiW) analyzers to the Oil and Gas Industries, providing innovative solutions that guarantee analyzers are self-cleaning, reliable and durable. Accurate measurement ensures process and environmental control and offers early warning indicators of leaks and discharges.